An NHS Consultant Plastic Surgeon since 2001

Mr Stone was educated in West Sussex before attending medical school at Manchester University in 1985. He subsequently worked as an anatomy tutor at the university before embarking upon a general surgical training in teaching hospitals in the North West, gaining his Fellowship of the Royal Colleges of Surgeons of England (FRCSEng) and Edinburgh (FRCSEdin) in 1994. He was also awarded a Master of Science degree (MSc), with distinction, by the University of London in recognition of scientific research undertaken at University College London between 1995 and 1996.

His plastic surgical training in Manchester, Oxford, Exeter and Plymouth provided experience in all aspects of reconstructive surgery including microsurgery. In 1999 he passed the Intercollegiate examination in plastic surgery – FRCS(Plast) – and was awarded a Certificate of Completion of Surgical Training in 2001 with accreditation on the General Medical Council’s specialist register for Plastic Surgery.

Mr Stone was appointed as an NHS Consultant in Reconstructive and Aesthetic Plastic Surgery at the Royal Devon & Exeter Hospital in 2001. As an NHS consultant his work focuses mainly upon the management of malignant melanoma, including sentinel lymph node biopsy, and soft tissue sarcoma, serving as chair of the Peninsula Cancer Network Sarcoma Site Specific Group between 2006 and 2009. He was the regional Training Programme Director for Plastic Surgery between 2006 and 2007 and has published extensively in the plastic surgery literature over the past 15 years, including having written several textbooks.

Mr Stone has a busy private cosmetic practice and specialises in aesthetic surgery of the breast (augmentation, reduction, mastopexy) and trunk (abdominoplasty and liposuction).

Mr Stone gained an LLM degree, with distinction, in legal aspects of medical practice from Cardiff Law School in 2012. Mr Stone has served a four-year term as a panellist with the Medical Practitioners Tribunal Service (MPTS), hearing cases both as a fitness to practise panellist and as an interim orders panellist.

Mr Stone is a full member of the British Association of Plastic, Reconstructive and Aesthetic Surgeons (BAPRAS). 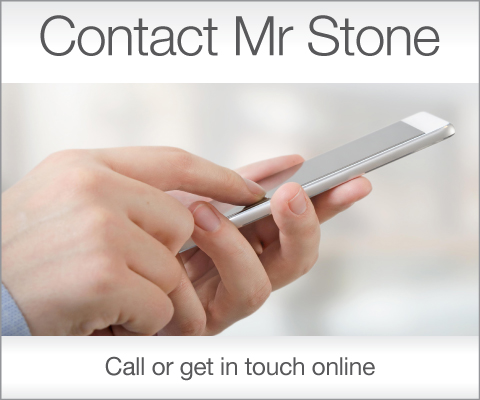 Get in touch via our form

This website uses cookies to improve your experience while you navigate through the website. Out of these, the cookies that are categorized as necessary are stored on your browser as they are essential for the working of basic functionalities of the website. We also use third-party cookies that help us analyze and understand how you use this website. These cookies will be stored in your browser only with your consent. You also have the option to opt-out of these cookies. But opting out of some of these cookies may affect your browsing experience.
Necessary Always Enabled

Any cookies that may not be particularly necessary for the website to function and is used specifically to collect user personal data via analytics, ads, other embedded contents are termed as non-necessary cookies. It is mandatory to procure user consent prior to running these cookies on your website.